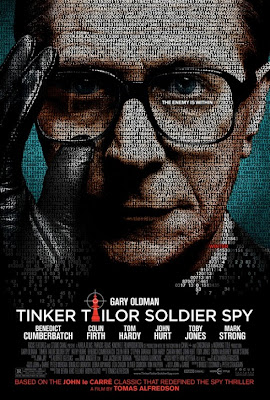 Tonight, Tomas Alfredson's film Tinker, Tailor, Soldier, Spy. An adaptation of the 1974 John le Carré novel of the same name, there was also a previous BBC TV miniseries of the story starring Alec Guinness. So this story has some miles on it. Alfredson, a Swede, is scarcely known in this country, having previously directed a 2008 vampire film called Let The Right One In (I recall hearing someone on NPR sing its praises). Beyond that I'd not heard of him. Le Carré is of course famous for a series of Cold War espionage novels. In his Wikipedia profile, le Carré's writing style and plotting are contrasted with Ian Fleming's James Bond novels from the mid '50s:


The le Carré Cold War features unheroic political functionaries aware of the moral ambiguity of their work, and engaged in psychological more than physical drama. They experience little of the violence typically encountered in action thrillers, and have very little recourse to gadgets. Much of the conflict they are involved in is internal, rather than external and visible.

Unlike the moral certainty of Fleming's British Secret Service adventures, le Carré's Circus spy stories are morally complex, and inform the reader of the fallibility of Western democracy and of the secret services protecting it, often implying the possibility of East-West moral equivalence.

This is a better summary than I could manage, not least because I've read none of his novels. But also because the film version has its hands full trying to keep us in the loop (me, anyway). There are so many names and so many faces, all of them mixed up in plots involving Russia and Czechoslovakia, people representing different and competing governmental agencies--or different clearance levels within an agency, people conspiring with Americans, and nobody seeming to be quite who they claim. With no one apart from the main character figuring very prominently in the story, I had only a vague, general sense of who anyone really was and of what was going on--yet to come back and read the plot summary I find I got most of it. I certainly applaud the film's refusal to resort to easy action sequences to keep us engaged, but the flip side of that coin is that we are left guessing for much of the film as to what the hell is really going on. In this sense, a seven-part miniseries seems very much apropos (I'm reminded of David Lynch's attempt to make Frank Herbert's sci-fi epic Dune into a film. Lynch's film was incomprehensible, while the later mini-series of that book at least had a fighting chance of being followed by anyone not already familiar with the novel.)


George Smiley (played by Gary Oldman) is an intelligence analyst in the highest tier of British Intelligence, a group called "The Circus." Smiley and his boss, "Control" (John Hurt), dispatch one of the Circus's agents to Czechoslovakia to meet with a military man who has information for sale. The information apparently relates to a Soviet spy working inside the Circus, but somehow the meeting goes badly and the agent is shot, causing an international incident. The debacle cause Smiley and Control to be forced out of the Circus and into retirement, shortly after which Control dies. It is then left to Smiley to figure out who the mole is.

I can't really comment much on the character of George Smiley as envisioned by le Carré, but in general the emphasis on internal conflict and moral ambiguity and tension over action gets my strong support. The George Smiley of the film is a real departure for Gary Oldman. Not only because Oldman, an American, is playing a Brit, but because his Smiley is utterly taciturn and stoical, adjectives that do not leap readily to mind when surveying Gary Oldman's previous work. [Epic research fail! Oldman is indeed a Brit, though that's news to me! H/T to dbackdad.] Indeed, Smiley is in several scenes before he speaks a word or indeed even moves a facial muscle. But Oldman is utterly convincing in the role, and I'm surprised to find that the enigma of George Smiley draws one in; I might have expected such an inscrutable character to leave me unengaged. But there's a touch of detective in him, and some of the plot details--a wife who left him after having an affair with one of Smiley's coworkers, for example--hint at something more than what we see. And it's enough, maybe even to get me to see what le Carré had in mind.

The rest of the cast is excellent, though nobody gets much screen time: Colin Firth, Ciarán Hinds, Tom Hardy, Toby Jones (it is, I realize as I type this, a very male-centered story). The film does an additional public service in letting us revisit the foibles of our past: the '70s were a great period for Cold War spy stories but, it must be said, a bad time for clothes and hairstyles. Members of MI-6 may not necessarily dress as if for a Blaxploitation flick, but there's just no getting away from the stylistic dark alley we were plunging down at the time.

I'm left feeling intrigued by the story and the manner in which it was told, but in truth I'm more inclined to watch the 1979 miniseries or read the book than to see this film again. I might have enjoyed it immensely if I knew the story, but that's not a very strong endorsement for this endeavor.

Posted by wstachour at 3:41 PM

I've heard good things about this movie, and will see it relatively soon. Like you, I've not read the book but did see the Guinness version many years ago.

One small quibble with your review, though, concerning Gary Oldman. Oldman is probably my favorite actor, with his role in Sid and Nancy being my favorite. Though he has played American characters many times, he is very much born, bred and educated British. It's largely his strength as an actor that might lead one to believe he was not British. I did a blog post on him many years ago (Gary Oldman).

It was funny that you mentioned Dune. Herbert's Dune is probably my favorite sci-fi novel of all time. I can't argue with a single thing you said about Lynch's adaptation other than to say I love it anyway. It's a combination of things. When you see your favorite book made into a film, you are just glad to see it on screen. Secondly, this was around the time I was in college and many a weekend was spent drunkenly watching Lynch films like Blue Velvet and Wild at Heart. Dune had many of those uniquely fucked-up Lynch touches. They were obviously completely out of place in a sci-fi movie but lent an almost campy charm. I cannot argue at all with the fact that the film was incomprehensible. I was only able to follow it because I had read the book many times. Lastly, watching that film was one of the things I remember doing with my brother. We're two very different people, but we had a common interest in that movie and watched it together, I kid you not, probably 20 times. I think we could recite the entire dialogue by memory. I'm especially good at Sting's overacting.

I own both that movie and the SyFy Channel mini-series version. The newer version is by far the better but the original will always hold an odd, twisted place in my heart. :-)

Ha! See, that's an Epic Research Fail right there! (That's it: I'm hiring you as my editor!)

I generally do a little minimal research on the fly as I write these, but I was so sure in my bone marrow that Oldman was an American that I didn't even bother to look it up. This despite my not having seen him in but a fraction of the movies you list.

I'm trying to remember what I've seen him in. Leon the Professional, Air Force One, Dracula, The Fifth Element, the Harry Potter things. Actually, doing my minimal research ex post facto, I see I've caught more of his work than I remember--though still a fraction of his output.

Not, however, Sid & Nancy, which I will put on my to-see list. Your comment is exactly on point: he's so convincing as an American character that I jumped in with both feet. (Regardless, he's really fabulous in Tinker, Tailor, even if he didn't have to affect an accent!)

Dune is one of the few sci-fi books I've actually read twice, and like you I love the David Lynch film. But I saw it a couple times with people who hadn't read the book and they were UTTERLY at sea.

Now I feel like I need to watch it again!

Being "at sea" in a David Lynch film or series is a normal state of being. :-)

Blue Velvet and Mulholland Drive would be obvious examples.

I actually picked up Mulholland Drive on my recent spin thru China. So it's on deck!

M and I plan to go see this film. We tend to like films that keep us guessing. I'll let you know what we think of it later.

Okay, we saw the movie. I loved it and didn't have any trouble following the plot lines I also predicted who the mole was and what was happening. My partner, while she enjoyed the movie, was confused about what was happening in different parts.

You're cleverer than me (would that were a more substantial endorsement ;-)! I'll see it again to solidify things at some point. My wife is a theatre professor and has every plot figured out in the first 20 seconds. Very irritating. I never think ahead in films; I sit and let it happen to me. So I'm maybe a little slow to grasp what isn't laid out plainly for me.

I tend to pay attention to odd things the camera focuses on, or that a director includes in a scene that seem out of place. They usually tie into the plot somehow, that's how I end up figuring out plot lines.