Come On People Now, Smile On Your Brother

I remember the point a couple years into college where I had a revelation about the subject of history. Always a lazy student, I spent my whole academic career chafing against the necessity of doing a bunch of stuff I didn't want to do, and this caused me to equate reading history for pleasure as akin to volunteering for torture.

I forget the circumstance now, but sometime in the early '80s I remember finding a book on my parents' bookshelves and deciding to take it on. The book was William Shirer's epic Rise and Fall of the Third Reich, which clocked in at a whopping 1,386 pages. For a guy who basically didn't read, that was an undertaking.

It's one thing to undertake it, and quite another to finish it. But I hardly put the book down until I turned the last page. Turns out it wasn't what I expected, and it kind of changed my whole perception of history. Instead of having to commit to memory a bunch of names and dates that had tenuous (or no) relevance to modern life, this book read almost like a novel. It was a personal eyewitness account of an almost unbelievable, world-shaking tale of events only recently past. And what a story; to this day nothing I have read in fiction can match the character of Adolph Hitler or the Nazi Party's rise to power and the consequences thereof. Whether inherently or because of this awakening event, the events of Germany in the 20s-40s retain a particular power on me.

I hope it's unnecessary to stress that nothing in the Nazi racial philosophy, and very little of their methods, resonated with me; on the contrary, I think (as I have said elsewhere) the idea that any meaningful thing about a person, or especially a group of people, can be known by their race is about as strongly disproven as anything can be. But I'm lying if I don't admit to finding the whole business magnetic: the downtrodden country unable to hold onto a government; the tyranny of the Versailles Treaty; the easy resort to scapegoating and the ready-made culture of anti-Semitism; the raucous street competition between thuggish groups of political adherents; the Nazis' utterly brilliant use of propaganda; the marches and mass rallies and symbolism; the snappy uniforms. And there is the character of Hitler himself, whose impact on people far surpassed anything I had seen in tepid, cynical American politics. I find myself instantly sucked in, and the film footage and photographs of that era are endlessly fascinating.

All this by way of introduction. Another crewmember mentioned a while back that there was a Nazi history museum here in Cologne. In my three years of coming here I had heard nary a peep about the place. I always assumed there would be such a facility in Berlin, but I hadn't thought to look for anything here. The party's control over the country was absolute, and the organs of state were everywhere, but I hadn't assumed that this chapter would be immortalized in museums in various places around the country. I just hadn't stopped to wonder about how modern Germany dealt with Nazi history.

I did a little research yesterday and located the place--not far from our hotel--but after walking over I found it closed for the holidays. I tried again this morning with better results. 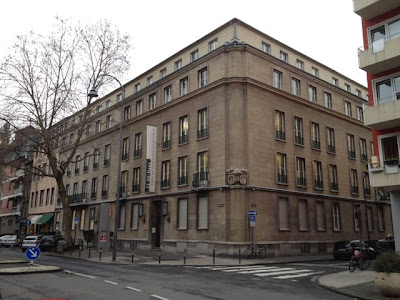 Called the El-De Haus (i.e. L.D. House, for Leopold Dahmen, the name of the jeweler who owned the building before it was taken over by the Gestapo), it served as the Gestapo's headquarters in Cologne from the middle '30s up to the end of WWII in 1945. And the reality of the place throws one straight into the brutality of the movement. It's not surprising that the Nazis would have had offices in any city or town, but the El-De Haus is sobering for its collection of detention cells in the basement and for its courtyard out back where hundreds of executions took place. The rest of the museum pulls no punches about what went on here and elsewhere. There were no laughing, chattering kids here; everyone walked around in a stunned silence. 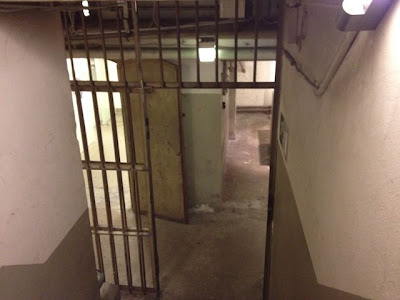 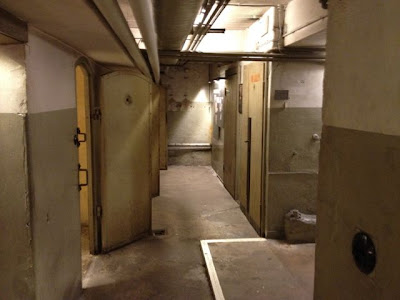 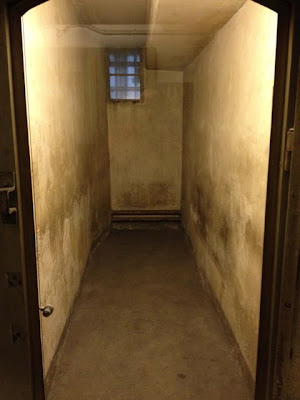 I'm fascinated by the question of how a country moves on after something like the Third Reich. In some ways I think this kind of descent into mass insanity could have happened anywhere (we see plenty of scary parallels in American culture right now, in fact). But it didn't happen just anywhere: it happened in the very center of Western civilization, in one of the most advanced and learned societies in human history. The arc of the Third Reich dragged much of the world along in its wake to its fiery conclusion, leaving a trail of millions of dead and billions of dollars spent to undo and / or contain what never needed to happen in the first place. 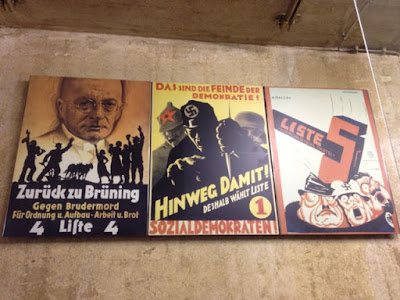 I certainly don't contend that contemporary Germans are under an obligation to atone again and again ad infinitum for the (admittedly unfathomably huge and ubiquitous) sins of their forebears; but neither can one just say "well that's done--let's move on!" however tiring it might be to have the elephant re-enter the room seemingly without end. It's important that these lessons, after all still very close in historical terms, not be swept under the rug of time. But how does the German state approach these things? And how should regular Germans look on them?

Apparently, without flinching and without pulling punches. The El-De Haus is a stark and grim reminder of just what the Third Reich was all about. In room after room, and display after display, no stone is left covering the ugliness that characterized what really happened here and across Germany. The numbers of people killed and tortured, who they were and how and when it was done, how it was justified and how and why citizens went along with it--all these things and more are gone over in graphic detail in the museum's five levels. I rented an excellent little audio player (there is some English in the displays, but obviously most everything is in German) and the displays have numbers which one punches into the player for an accompanying narrative.

There are numerous displays and photographs spread through the offices, mostly organized a topic to a room and arranged chronologically within subjects. Rather than a history of the El-De Haus and the Nazi doings in Cologne, it's a more comprehensive exposé of Nazism with an emphasis on Cologne. The museum finishes up with displays showing the state of things in Cologne at war's end. A video screen shows aerial footage of a completely bombed-out Cologne while the opening strains of Glenn Miller's "In The Mood" plays in a loop.

I'm glad I went, and it's a really important undertaking; but it's probably not a place I ever need to see again.
Posted by wstachour at 11:29 AM

Definitely important. I'd look it up if I ever get out that way. Never forgetting something like this is the key.

One of my oldest client's (oldest in how long they've been my client, that is) dad was a survivor of the concentration camps and only survived because he was a barber and considered useful by the Nazis. Spielberg's Shoah Foundation (you see it at the end of Schindler's List) filmed his remembrances to be included in the museum. My client gave me a DVD of his interview. Powerful stuff.

One of the sure benefits of travel, obviously, is to make real what we know from reading. Certainly, I wasn't interred here nor suffered the mistreatment that marked the place and era, but it still kind of sucks the soul out of you (to borrow a metaphoric turn of phrase) to stand where so many died.

I'm so glad you came around to history. I teach history in addition to practicing law. I find history endlessly fascinating, even though I hated it in high school. WWI-the Cold War is my favorite time period. I have a great-aunt who survived the camps. She is the one who really stirred my interest first in WWII and then in history. This happened because she was German, not a Jew, and she and her entire family were put into camps because they were Socialists. I ended up writing an undergrad thesis on the topic and won a national prize for it. After that, there was no stopping me. When I teach my students history, I try to show the relevance between the past and the present, I try to help them make the connections between events and make the time come alive for them. I don't win them all over, but by the end of each semester I have students come to me and tell me how much they enjoyed my class even though they've always hated history. Too bad I found my true calling as a history teacher after going into huge debt to become a lawyer. Life's funny like that. Oh, and I left a message for you on my blog after your comment. I said, to look up the couch potato to 5K program on line. It's so easy to get back into jogging slowly. That's what we did. Good luck.

I suppose it was something contrary in my nature, but upon reflection history SHOULD be inherently fascinating. It's who we are and what we wrought and what it means! I've gone on to read a lot more history since.

And I don't know that law and history are necessarily incompatible or non-sequitur; both deal with the nuances of language (I've long been interested in law, but I simply don't have the study habits to do anything about it!).

Fabulous that you have such a rich trove of human stories right in your family. Reminds us that history is all personal if we can find access.