I'm only here for about 24 hours, during which I need to get a couple sleep periods. So this covers a single day spent wandering around. 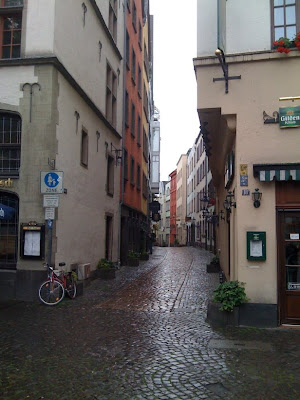 It was a long flight over here from PHL, the longest single leg now in my logbook, about seven and a half hours. And it seems even longer since we fly against the earth's rotation; we departed in the morning from PHL and landed in darkness in Cologne at about 10:30 pm local, so the seven hours seems more like an all-day affair. Unfortunately, it was mostly cloudy beneath us for the duration, so apart from the occasional glance of the featureless Atlantic we saw little. And for my comparatively brief glimpse beneath the cloud deck coming into CGN the landscape looked (dare I say it?) very much like America in the dark from the air--similar patterns and colors of lights with darkness interspersed, though with perhaps fewer of the twinkling safety yard lights between settlements. Not sure what this implies (if indeed it's even an accurate observation).

The CGN airport is beautiful and strikingly modern and fresh-scrubbed. The company has a new gazillion-dollar facility here, and it all looks aggressively high-tech. All lighting and equipment are top-shelf, with a lighted "follow me" car meeting each and every arrival and marshalling us to our parking spot, where we descend the nicest and most over-built set of crew stairs I think I've ever seen (after all we're about 2&1/2 stories off the ground). Legendary German engineering abounds everywhere, with everything--tugs and power carts and air carts and loaders--looking new and carefully-maintained. Everyone wears full-body orange canvas suits for visibility. Our transportation into town is waiting for us, a Mercedes-Benz Sprinter driven by a slighly Emo-looking woman who proved very adept at her manual transmission.

For whatever reason CGN (the official nomenclature for which is EDDK) has the most stringent noise regulations of any airport we fly into, and we've had an ongoing flurry of company communications about how to minimize our noise footprint. To that end, there are a bunch of arrivals and departures from the airport which must be used and flown with absolute precision concerning both their tracks over the ground and also the altitudes and power settings at which we fly them. Letters of warning and fines lie in wait for even small deviations from the procedures. There are similar procedures in place for American airports, but nothing like the to-the-letter adherence to every last detail of them. We will often be given headings to join up somewhere in the middle of a procedure or even to bypass the procedure entirely. So I expected A) the airport to be plunked MDW-style in the very center of CGN's population, and B) a pair of Empire Strikes Back / Cloud City-style flying police cars to meet and flank us from area arrival to touchdown. Shockingly, neither supposition came to pass. Our approach to the field was over sparsely-populated terrain, and--surprise--the controller gave us a heading that bypassed the entire arrival. Just like an arrival to ORD. After all the build-up, I almost wish I'd put the gear & flaps down and carried a bunch of power just for spite. (OK, no, but I was glad it was all so painless.) 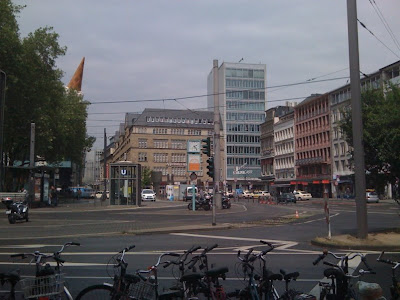 The cab ride into town was like our regular cab rides everywhere, though it's always interesting to see the subtle differences in how the roads are constructed and in signage. I once flew with a guy who made a habit of renting cars in whatever foreign city he visited, and he said that driving in Europe was exactly like driving in the States, and I can see that this might be true here, at least for this short stretch (though I'm reminded of the perilous nature of what I'd expect driving to be like in England, at least initially). Signage is similar or at least decipherable, and people drive in familiar fashion. 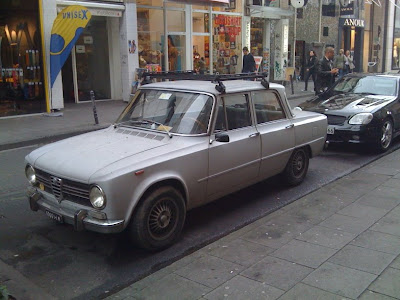 Cars here seem to be like what I remember of European cars from my visits to Paris, with (naturally) all manner of German cars--M-B, BMW, Audi, VW, Opel--plus all French makes--Citroën, Peugeot, Renault--and even the occasional American car--specifically, a couple Jeeps, an old Cadillac and a bunch of European Fords. All the taxis seem to be Mercedes-Benzes, driven by (I feel sheepish even mentioning it) what appear to be native white guys (I did see one white girl later in the day). But everything is diesel-powered, and most everything is manual transmission. Cars are on the whole smaller than what we have in the US (I love the big-style little Alfa-Romeo above), but not everyone is driving a Smart Car. Most cars are VW-Golf-sized, and one sees both larger and smaller from that mean. I saw one especially fetching Renault (maybe a Peugeot) that was slightly larger than a Smart Car that had two rearward-sliding doors, (like a minivan's middle doors) as its main doors. I was not quick enough to get a picture, but it looked fantastic. As we saw a couple years ago all over Europe, there just seems a lot more energy spent here than we see in the US making attractive smaller cars. Work trucks are all smaller than at home (though larger than we saw in Paris), and no one is driving an Escalade or a pickup truck for personal transportation. 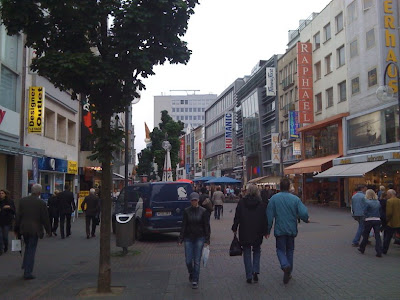 There are a ton of bicycles here, very nearly as many as in Amsterdam. The old inner city seems pretty compact, and there are bike lanes everywhere, plus quite a network of above-ground trains which seem clean and much-used. I can only assume that the prevalence of bicycles is an indicator of their utility and not a fitness craze, since everybody here seems to smoke. There is at least some smoking indoors, but most people smoke right outside the entry doors of establishments, like American workers taking their smoke breaks on the sidewalks. Like elsewhere in Europe, CGN has lots of outdoor cafes, though they were quiet for the first part of the day because of the rain. Later when I was out they had begun to fill up. 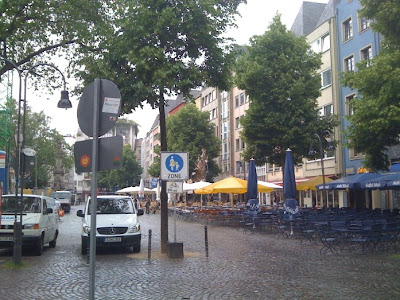 Everybody is quite friendly, though people keep to themselves. In five hours of walking I was only approached unexpectedly by a single person, a worker unloading a truck who must have thought I was affiliated with the store. I went in a number of stores where I was greeted cheerily and left alone. Everybody speaks a little English, and does not seem to begrudge having to do so, such that basic communication is not difficult. Still, one hears less English spoken here than I did in Paris, with only the occasional knot of American tourists. I managed very early to find an English store, like the American stores I found in Paris, except that these were catered to British tastes. But they stocked honest-to-god Diet Coke, so they are now my new best friend in Germany. If my iPhone were functional here, I'd drop a pin here and list it as an emergency contact. 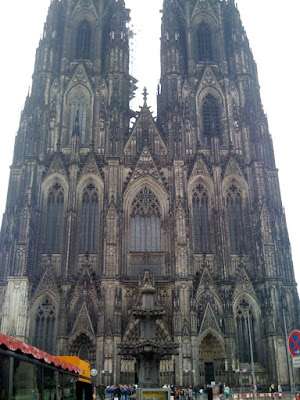 The city is built along the Rhine river, with the famous Dom cathedral just to the North of our hotel. With the spires towering above everything and easily visible (like Paris's Tour Eiffel), navigation is quite easy, at least in the old town. There are postcards and pictures available showing the condition of the city after massive Allied bombing in WWII, and the cathedral was about the only thing standing. This explains why so much of the city feels new and modern. The cathedral itself is gigantic--Paris-cathedral-sized--and seems very old.

I went inside, where a huge crush of tourists was noisily taking photos of everything (I'm happy enough to see the throngs irreverently treating the building like a mere piece of unusual architecture, but even I am accustomed to finding a sense of tranquility in a church. The crowds are distasteful anyway, and one hopes that there is at least silence in the church!). 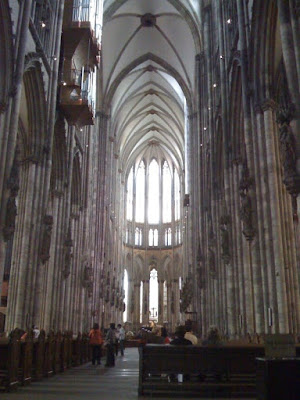 I got a few photos, though the exterior is hard to get far enough away from to get a good framing. Inside there are a couple organs, the main one high on the wall of the nave, speaking down to a choir gallery at floor level. The organ console, hidden behind a rückpositif, hangs from cables out over the floor about three stories up; it would seem a scary place for one not happy with heights! 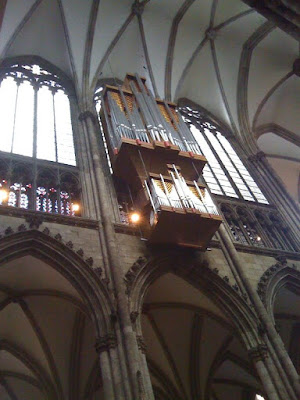 I can see that this would be a great place to have a long weekend layover, both for further exploration of the city itself and also because all of Europe is but a short train ride away. I'm hoping to arrange a layover this summer or next where I can get to a Formula One race, since both North American races are gone from this year's calendar. 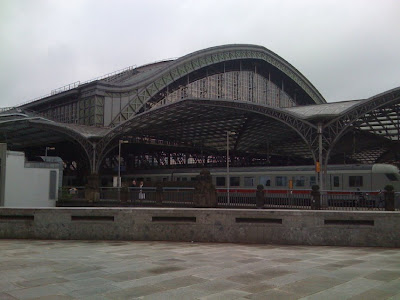 I've never been squeamish about traveling, but I realized before I left that so much of the invisible support network that I take for granted in the US doesn't exist here, or at least it's harder for me to access it. For as long as I've been a pilot--even in my previous "international" experience in Canada and Puerto Rico--I've been able to pull out my phone and contact a staff of people whose job it is to solve problems for us when we travel. But here my phone--on which I've become increasingly reliant with its internet access and GPS mapping and all my one-touch phone contacts--does not work, and I can't just pick up a phone and dial an 800 number (or, if I can do it, I don't know how). I discovered Skype a while back, and I used that today to make some calls back Stateside, but of course I need to be checked into my hotel in order to have internet access. I'm used to wandering around strange cities by myself, and I will often call my wife or one of my friends to share the experience. But here I feel distinctly isolated. That's not an ominous thing, or it needn't be, but it's a fact of life in this new setting. And I imagine I'll feel even more isolated in, say, Shanghai or Almaty (where I'll be in a couple weeks' time) where not everyone (no one?) can be counted upon to speak a little English.

And now, after a short nap, it's time to head back to the airport for the flite back to PHL.
Posted by wstachour at 2:48 PM

Your pictures are fantastic! And good to hear there's Diet Coke out there in the wilds. :)

I might have to re-think the international vs domestic gig. Cheers.

Just read your story now, and it seems like a neat place to visit. I think it also would be a place to go and explore more. Also a place where a second language might help.As always, i would like to know more about the railroads, both present and past. Maybe on your next trip, some exploring might be in order.