After my Further Adventures In Chengdu, I had hoped for a fruitful first visit to Seoul. I've flown through Seoul on two or three occasions, but always as a brief stop en route to a further destination (typically Almaty). So this was the first time I got off the airplane in Korea. Alas, the layover was fairly short--24 hours--and my sleep schedule kept me from doing much.

Our Seoul layovers are near the airport in Incheon, rather than in Seoul proper which is roughly 30 miles distant. And there's not much to see in this section of Incheon. Not that I'm complaining: our hotel there (the Sheraton Incheon) is among the nicest hotels I've stayed at. The outside wall of the rooms is entirely glass--amazing views.

Incheon, at least this part of it, is an odd place. We got to the hotel around noon and I managed a two-hour walk around the neighborhood. Part residential area, part (seeming) abandoned expo site, it feels like a recently-created space that hasn't yet found itself. The region of Incheon around the hotel looks to be made up of landfill--a totally-flat, rectangular area of several square miles mostly surrounded by water. The Google Map photos (which I typically consult to figure out which direction to walk) show only a fraction of the buildings and streets that exist presently; most of the stuff I walked among was not here a short time ago. And even now much of the area is still wild, grassy fields with a scattering public works projects: walkways and waterways and ponds. Out the hotel windows in the distance is the spectacular Yeongjong Bridge which carries traffic out to the airport. In the Google satellite photo the bridge is only a collection of pylons out in the water, which dates that photo to the late 1990s (the bridge opened in 2000).

Walking around, there are numerous architecturally-spectacular high-rise residences and convention-center-type buildings. Most of these latter structures look totally uninhabited. Not run down or neglected, just empty. The residences, on the other hand, look tall and expensive, some of them spectacularly so. By contrast, most of these buildings seem inhabited. Evidently planning for the kind of bodies-per-square-mile density that is typical in Asia, the ground-floors of all these buildings are dense with shops and restaurants and bars. But many of these were closed on this Tuesday afternoon, and there were plenty of vacant storefronts. Not sure if this means business is unexpectedly bad or maybe this is still an early development phase with much more to come. But it all has the feel of a tourist place in off-season. There were quite a few people around, yet lots of stuff was empty or uninhabited. A strange state of affairs.

That's about all I managed to see in Seoul. After sleeping from about 6:PM until 2:AM local time, I awoke to rain and was confined inside until we left to fly out to Almaty at 11:AM. This was a 6.5 hour flight, which is pretty short in this kind of operation, and we flew with the sun so that the crossed time zones kept knocking the hour back. Despite the eight hour workday, it was only an hour later when we landed than when we took off. We were at the hotel by about 4:PM. After a bite to eat it was bedtime by the body clock, so the exploration would have to wait for the next day. 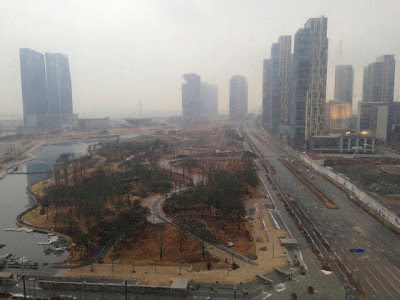 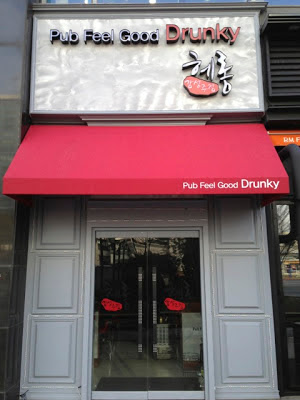 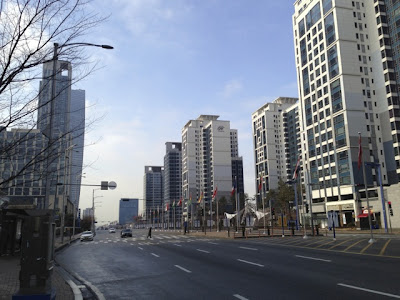 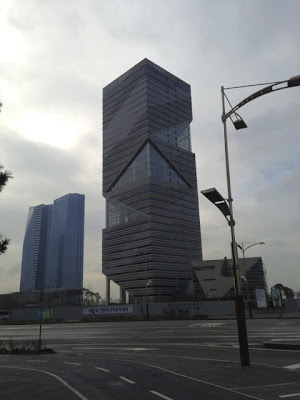 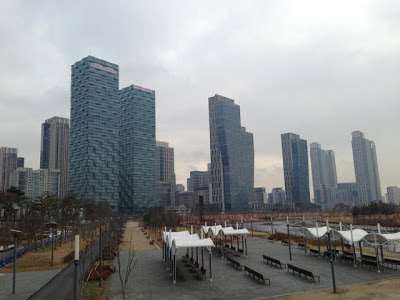 Almaty is a unique place in my experience. I've been there several times, and it belongs in the category of Places I'm Glad To Have Visited But Would Never Have Seen If I Hadn't Been Paid To Come Here. It appeals to a traveler's sense of adventure, as it's just so different from most of the other places we go. As the few who follow my travels will know, my layovers typically consist of daylight wanderings and very unadventurous culinary exploration. I've walked around pretty extensively on previous Almaty layovers, but I get here just infrequently enough that it always seems a bit new to me. I try to walk unfamiliar streets if possible, and this combination makes it seem like a new place altogether. I don't remember my last mid-winter visit, but temps were cold this time--around 20°F--and there was a recent accumulation of snow.

Kazakhstan strikes me as exactly what folks had in mind when coining the term "Second World." It's civilized enough to have most modern conveniences--cell phones, internet access, safe food, full-time electricity, running water, gas stations, convenience stores, car dealerships. But these amenities can at times seem out of place. Traffic control is pretty spotty (not to say nonexistent), and the roads range from beautiful and expensive multi-lane freeways to almost cart paths. (Even the freeways don't seem set up for freeway speeds.) On foot, many sidewalks are unpaved, and few of them today were clear after the recent snowfall. The snow had been packed to sheer ice by a million footfalls and walking could be treacherous. But nobody seemed to notice, and everyone was wearing sturdy, outdoor footwear (I looked out of place in some New Balance walking shoes).

Likewise the housing. Some neighborhoods look almost ghetto-like, with residences of corrugated metal and old wood that had never seen paint. Most are sturdier-looking than that, but most residences look conspicuously beat up, either from lack of care or from the harsh environment. Even the nicer places--and there are some pretty swanky buildings mixed in--all show the ravages of the cold climate and the thick air pollution. Power generation must come from burned coal, and there was a thick, acrid layer that hung at the ground on both days we were there (it's very visible from the airplane coming in and out) that I, at least, never really got used to. I don't remember this from my previous visits, so maybe it was just an aberrant atmospheric thing.

But don't let me give the wrong impression, it's not at all an unpleasant place to walk around and the eye is stimulated constantly by the things odd to Western eyes. Like much of the rest of the world, most people seem to live in collective residences--blocks of mid-rises or small houses tightly packed together. The ground floors of the housing blocks are mostly given over to businesses--travel agents, restaurants, coffee shops, computer repair places, tobacconists, tiny little convenience stores. Other stand-alone shops range from swanky to barely cobbled-together. Several auto repair places I saw were made up of dirt yards surrounded by ripped and rusty metal sheets for fencing, hulks of cars and trucks and various mud-covered parts spilling out onto the sidewalks. The actual repair shops were so ramshackle that I doubted they could even be heated to any degree. Though there are plenty of nice cars in Almaty--Jags and Lexuses and BMWs and M-Bs--most of the cars being fixed at these shops would have been in the graveyard back home.

I recognize a little Russian being spoken as I walk around (not understand, just recognize). The Kazakh is unfamiliar to me; I decided that's what I was hearing since it wasn't Russian. People are nicely dressed for the most part, and for such a dirty place there are a surprising number of really beautiful women--not just beautiful but expensively dressed, albeit in a cold-weather variant. Lots of thick coats with fur-trimmed hats, legs in black tights and heavy boots poking out from beneath.  And lots of smoking, men and women both.

I managed about three hours, fortified by a couple convenience store snacks, before I had to be back at the hotel to prepare to fly out. No photos of anything in particular, just snapshots of a Thursday in Kazakhstan. 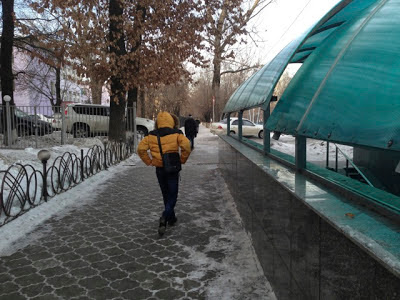 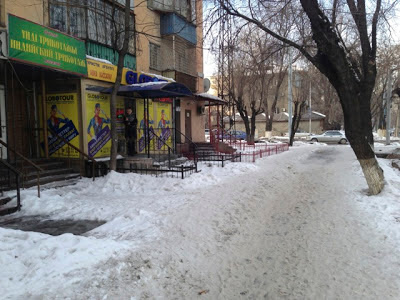 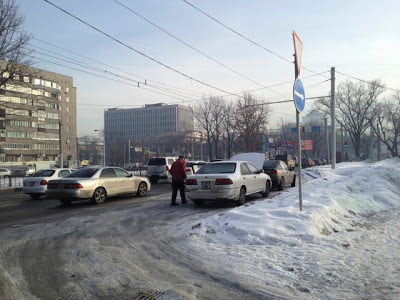 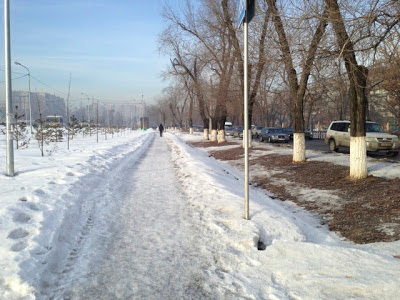 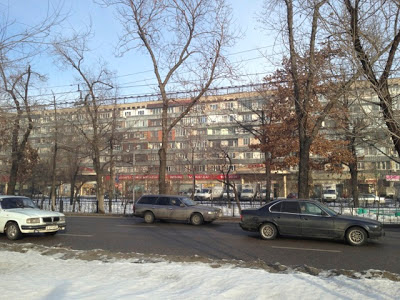 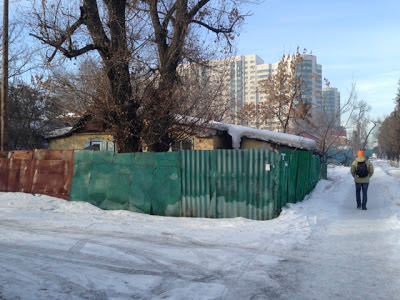 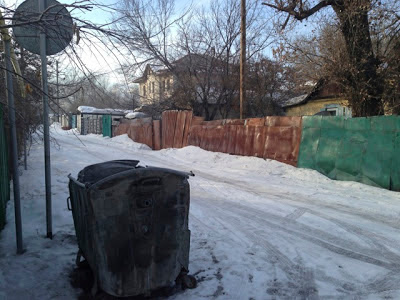 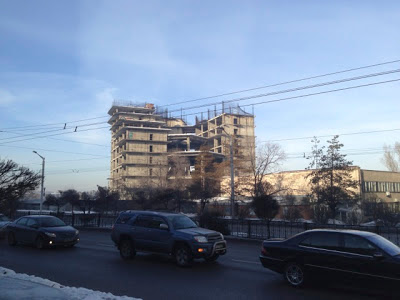 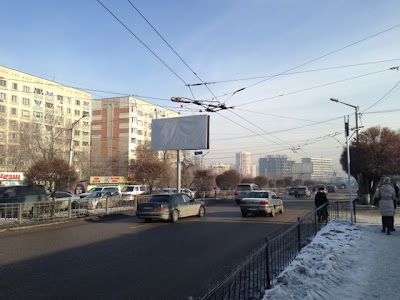 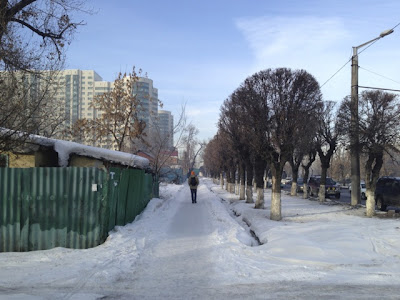 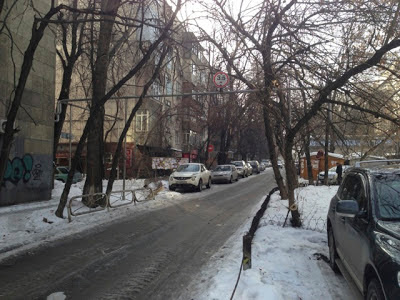 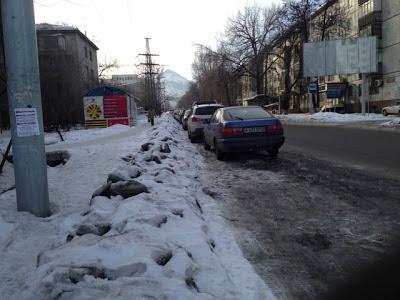 I think in the end there's just something invigorating about stepping out into this (to me) foreign crush of humanity and briefly joining them as they go about their business. This is true of anyplace we travel, of course, and things like shopping in China or the Star Ferry in Hong Kong or such make for additional special enticements. But most of the value of this is travel for travel's sake, and from this little perspective Almaty is every bit as worthy a place as any other.

My schedule for the next two months is a grab-bag: I call in on my assigned days and they tell me if anything is on the boil. If not, I'm free for another day until I call in again. Not bad.
Posted by wstachour at 3:25 PM